The proportion of domestic and foreign past due B2B invoices in Hong Kong (domestic: 50.0%; foreign: 50.3%) is higher than that recorded at regional level.

Hong Kong is forecast to see an acceleration of GDP growth to 3.1% by the end of this year, following an expansion of economic activity  by 2% in 2016. Despite this, headwinds, from China and its own overheated property market, could cause growth to slow over the medium term. Confronted with a challenging business environment due to – among others - developments such as Brexit, US protectionism and the slowdown in Asia, 27.5% of suppliers in Hong Kong stated their intention to increase their credit management.

Similarly to what was observed in 2016, respondents in Hong Kong are more open to selling on credit terms to their domestic and foreign B2B customers than most respondents in the Asia Pacific region. With an average of 50.3% of B2B sales on credit terms, the country has not seen a meaningful change compared to 2016 (50.1%). 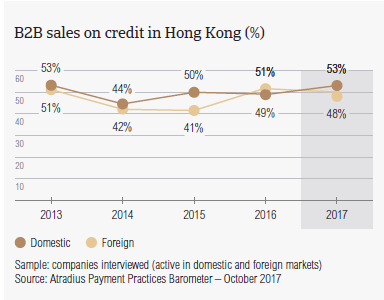 In 2017, respondents in Hong Kong reported minor changes in the proportion of past due receivables from both their domestic and foreign B2B customers. 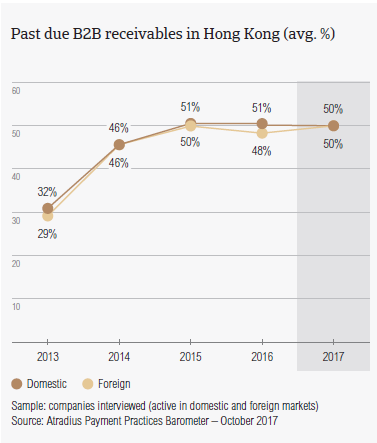 In 2017, suppliers in Hong Kong needed to wait 54 days, five days fewer than in 2016, to turn B2B receivables into cash. However, this is one of the longest invoice to cash turnarounds in Asia Pacific; only shorter than Taiwan (71 days) and India (61 days). 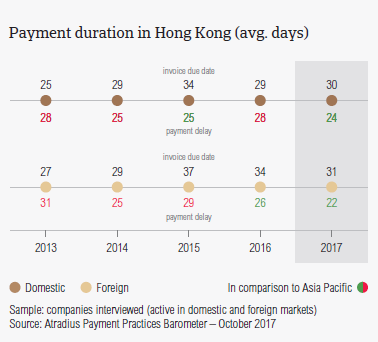 Domestic and foreign B2B customers of respondents in Hong Kong seem to delay payments mainly because of insufficient availability of funds. The same payment delay factor was reported by the majority of respondents in Asia Pacific. 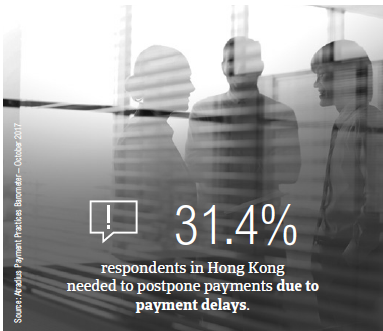 Respondents in Hong Kong seem most likely to increase creditworthiness checks and their monitoring of buyers’ credit risk to increase protection against risks arising from Brexit, US protectionism and the slowdown in Asia. 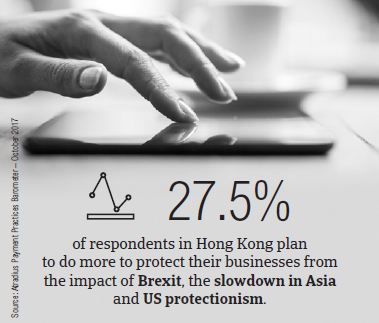 The total value of B2B receivables written off as uncollectable in Hong Kong appears to be flattening out; decreasing from 2.5% in 2016 to 2.4% this year. This is above the regional average of 2.1%. 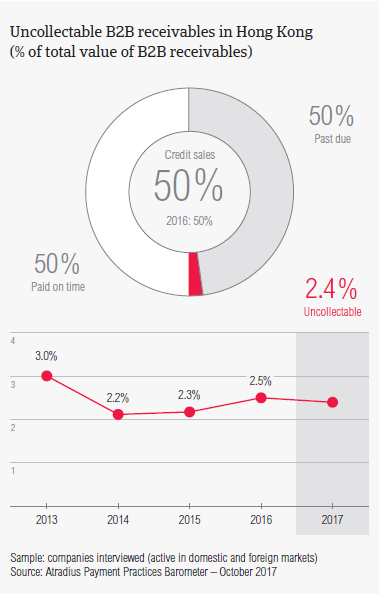 Looking at the coming 12 months, respondents in Hong Kong expect that the payment behaviour of their B2B customers will deteriorate slightly. 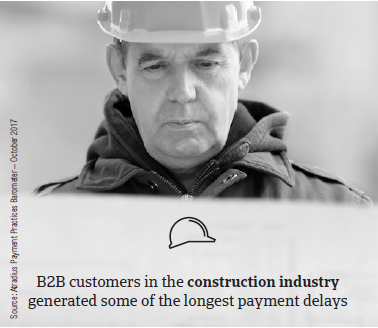 The automotive sector faces decreasing domestic sales due to a decrease in population and a growing share of elderly citizens as well as tax hikes.