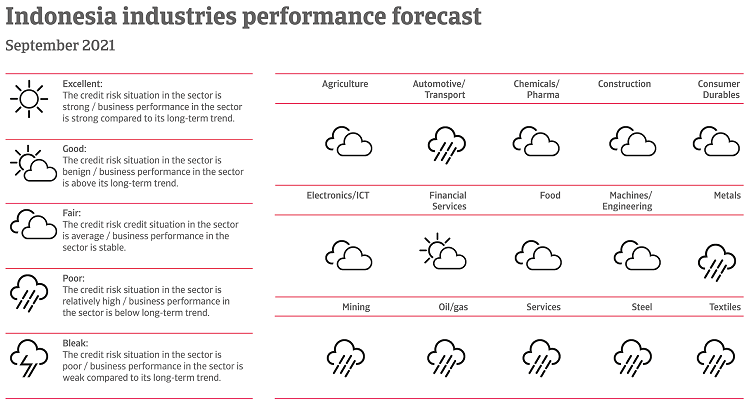 A massive spread of the pandemic since June

In April 2019, President Joko Widodo was re-elected with 55.5% of the votes, providing him with a second term until 2024. As in his first term, Widodo has continued to tackle economic reforms, such as infrastructure improvement to support the manufacturing sector and digital economy, reforms of the labour market and foreign investment rules. However, some key elements of his policy agenda remain contested due to vested interests. While Widodo has broad support in the House of Representatives, the wide range of political groups in his cabinet makes decisive policy making difficult.

Compared to its neighbours, Indonesia’s government was late in taking comprehensive measures to contain the coronavirus spread in 2020, most probably due to concerns over negative consequences for the economy. Indonesia did not impose a full-scale lockdown, but looser restrictions on social activities were implemented across the archipelago throughout last year and in early 2021.

Since June 2021, coronavirus cases have sharply increased, spiking at 55,000 new daily cases in mid-July. The country has experienced among the highest rate of coronavirus cases in Southeast Asia. Since early July 2021, more restrictive lockdown measures have been imposed, in Java, Bali, and other parts of the country. While the immunisation programme started in January vaccine rollout has been slow so far, with only about 13% of the population fully vaccinated by the end of August.

In 2020, Indonesia’s GDP shrank 2.1%, a rather small contraction compared to many other countries. This is partly due to the fact that the Indonesian economy is rather closed (exports account for just about 20% of GDP, which makes the country less susceptible to global trade downturns than some other Southeast Asian countries). Imports (down 14.7%) decreased much more sharply than exports (down 7.7%), while Indonesia's economic performance was also sustained by higher government consumption.

In Q2 of 2021, Indonesia's GDP grew 7% year-on-year, due to surged exports (mainly commodity shipments), robust government spending and a rebound in investment. Household consumption, which accounts for more than 50% of GDP, increased 5.9%.

However, Indonesia's economic outlook for Q3 is muted. Mainly due to the sharp increase in coronavirus cases since June and subsequent lockdowns, the 2021 GDP growth forecast has been revised downwards to 3.3%, from 4.7% in March. Private consumption and real fixed investment, both of which were the main growth drivers in the years prior to the pandemic, are expected to increase 1.6% and 6% year-o-year respectively, while Indonesian exports are forecast to rebound by 19%, helped by strong global commodity demand.

Some Indonesian industries have proven to be resilient

When it comes to Indonesian industries performance, agriculture is one of the most resilient sectors amidst the coronavirus pandemic in Indonesia, with rising output in 2021. The chemicals and ICT industries have also proved to be rather robust. Demand for ICT products has rebounded since H2 of 2020, with an increase in projects supplying hardware and other IT infrastructure. ICT wholesalers and suppliers for projects have been able to retain the level of revenues and margins recorded in 2019.

In the Indonesian construction sector, infrastructure activities decreased in the January-May 2021 period. However, new infrastructure projects are expected to start in H2 of 2021, supported by higher public spending. The energy and mining industries suffered from a sharp decrease in investments last year. While performance has improved in H1 of 2021 due to increased commodity prices and the initiation of new smelting projects, the recovery of the mining industry has remained below expectations so far.

Due to lockdown measures and travel restrictions many Indonesian service segments have suffered heavily, especially tourism-related ones. These include hotels, restaurants, bars, entertainment and cultural events, travel agencies and tour operators. Hotel and catering value added contracted 10% in 2020, and a rebound is currently not yet in the cards. Thousands of hotels and restaurants have been forced to close, while related businesses and tour operators have suffered major losses.

Fiscal and monetary measures to support the economy

The Indonesian Central Bank lowered its benchmark interest rate by 150 basis points in total since the start of the pandemic, to 3.5% since February 2021. It is expected that the benchmark interest rate will remain low for the time being in order to support the economy. This monetary policy is supported by low inflationary pressure for the time being, as the annual inflation in Indonesia is expected to remain at 2% in 2021.

Additionally, the Central Bank lowered the reserve requirement ratio for banks in 2020 in order to give the Indonesian banking industry more room to support local businesses. Since last year, it has injected more than USD 57 billion worth of liquidity into the financial system.

The Indonesian government has removed the constitutional budget deficit cap of 3% of GDP for the 2020-2022 period and allocated stimulus amounting to USD 49.5 billion (4% of GDP) in 2020. In early 2021, the government announced additional fiscal support of USD 43 billion. Key measures to support the economy have so far included higher health care spending, social protection measures, corporate tax cuts, credit restructuring, special loans to SMEs, cash handouts to the poor and to workers in the informal sector (about 70 million out of Indonesia’s population of 270 million work in the informal sector), and expansion of public sector projects.

At this rate, Indonesia's government finances remain manageable, also owed to the fact that pre-pandemic annual budget deficits were low. The government officially aims to decrease the deficit down to below 3% of GDP in 2023, in order to comply with the budget deficit cap. However, this aim could be impeded by lower than expected growth and interest rate payments not offset by tax revenues. Persistent low tax collection, subsidies and inefficiencies in government budget disbursements remain issues.

The capital-adequacy ratio (22.8%) and non-performing loans ratio (2.8%) suggest that the Indonesian banking sector is sound. However, negative and decreasing net foreign assets of the sector point to a major weakness. Another weak point concerns the rather high share of foreign-currency loans and deposits among banks (around one-seventh of their exposure). Additionally, banking supervision is still not fully in compliance with international standards.

The Indonesian foreign debt level in terms of GDP seems manageable (33%-36% of GDP between 2015 and 2019), but it looks more worrisome as percentage of exports of goods and services (between 159% and 189% in the same period). The foreign debt level increased to 206% of exports of goods and services in 2020, mainly due to a further increase in foreign debt and decreased exports. It is expected to remain high in 2021 and 2022, at 175%. Rather low foreign assets and the unfavourable creditor structure of foreign debt (almost 85% private creditors) also add to external solvency risk. The debt-service ratio remains high at more than 25% in 2021, and the annual current account balance has remained persistently negative over the past couple of years (estimated at -1.4% of GDP in 2021 and -2.1% of GDP in 2022).

Indonesia’s more liberal trade credit policies in the year following the outbreak of the pandemic have led to an increase in late payments.

As vaccination campaigns are underway, the world economy is recovering from the pandemic. Advanced markets generally have higher vaccination rates than emerging markets

Pandemic containment and a faster Covid-19 vaccinations rollout are key in order to sustain Vietnam's GDP growth forecast of more than 6% in 2021.