The amount of suppliers facing insolvency will increase further in the coming 2-3 years, as many will find it hard to adapt to changing market conditions. 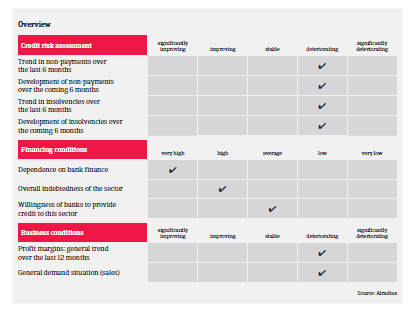 The British automotive sector´s performance has deteriorated over the past 12 months. Major challenges are looming, and the credit risk situation has worsened since the end of 2018. Therefore we downgraded the sector performance outlook from “Fair” to “Poor” in May 2019.

According to OICA, in 2018 UK automotive sector output decreased 8.3%, followed by a 20.1% decline in H1 of 2019 (this steep decrease can be partly explained by the fact that several major plants closed down in April in expectation that the UK would leave the EU in March).

According to ACEA, in H1 of 2019 new passenger car registrations in the UK decreased 6.8%, commercial vehicle registrations fell 9.5%, and exports declined 21%, despite a weaker pound. Exports account for around 80% of production, with the EU being the biggest export market, accounting for 53% of exports in 2018.

The depreciation of the pound since the June Brexit referendum has pushed up the cost of importing both vehicles and components. Approximately 82% of domestic-sold vehicles and 60% of automotive components are imported from the EU. The decrease in new car registrations requires dealers and manufacturers to absorb a share of those increased costs, which negatively impacts their margins.

Both lower production and sales are the result of weaker demand domestically and in overseas markets (Europe and Asia), model changes, a continued decline in diesel sales, uncertainty about emission reduction plans and the Brexit outcome. The outlook for the coming months remains subdued. The looming Brexit continues to affect consumer and business confidence in the UK, and there is no short-term rebound of the European and Chinese car markets on the horizon.

We expect that both payment delays and insolvencies will further increase in the coming 12 months, with business failure rising by about 7%, mainly affecting smaller suppliers and car dealers. The decrease in domestic car sales is impacting profits of new car dealerships, with some having to restructure and downsize. Lower production has already impacted suppliers, particularly those that had invested in expanding their facilities, expecting that robust growth would continue.

The outlook is especially worrying for smaller suppliers in the Tier 2 segment, as many OEMs are phasing out the one-engine combustion model and are shifting to increased production of electric vehicles. Jaguar Land Rover has announced a major cost reduction project, while both Ford and Honda will close plants in 2020 and in 2021 respectively. All this will hurt suppliers, many of them already struggling with deteriorating margins.

As OEMs will look to obtain cost synergies wherever possible, especially producers of generic parts can expect increasing price pressure. We expect the amount of suppliers facing insolvency to increase further in the coming 2-3 years, as many, facing innovation challenges and liquidity issues, will find it difficult to adapt to the changing market conditions. External finance providers will turn more restrictive given the poor performance outlook of the industry and will only increase lending when fully secured. Comprehensive government support (e.g. grants and guarantees) is far from certain, as many other UK industries would also require backing, especially in the case of a hard Brexit.

The downside risks of a hard Brexit

The true implications of Brexit for the industry still remain uncertain. A hard Brexit outcome (ending access to the single market and customs union) without any interim arrangement would severely hurt both producers and suppliers, leading to even higher costs and burdens for the already stressed sector. Under World Trade Organization (WTO) rules, there would be a tariff of 10% on vehicles and 4.5% on components. The introduction of customs controls would hamper the just-in-time delivery of parts from EU suppliers, and lead to higher stocks, thereby increasing costs as on average approx. 60% of components in UK-made cars are imported from the EU. Foreign-based car producers with operations in the UK could suffer from deterioration in profits and an impairment in assets.

For the time being, our underwriting stance remains neutral towards OEMs, and Tier 1 producers, but we have tightened it for the Tier 2 and the car dealers segments. A hard Brexit decision would most probably lead to a comprehensive review of our underwriting stance. There is also the concern that any US tariffs on automotive imports would affect the sector´s performance as the US market share in UK automotive exports amounts to about 18%. 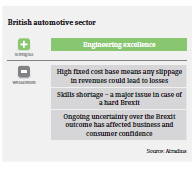 As many building materials are imported from the EU tariffs or limits on quantities imported after Brexit could lead to higher costs and material shortage.

The UK leaving the EU without a deal would be a major disruption, causing business insolvencies to be higher in the UK and EU27.