Contingent on pandemic containment, GDP of the Czech Republic is forecast to grow by 4.5% in 2022

Contingent on pandemic containment, GDP of the Czech Republic is forecast to grow by 4.5% in 2022 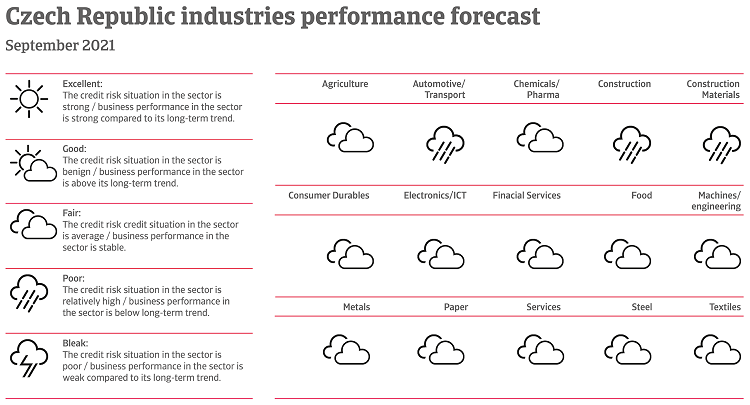 Since its inauguration in July 2018, the coalition government between the populist party “ANO 2011” (“Yes 2011”) and the leftist Czech Social Democratic Party (CSSD) has lacked a majority, with only 93 seats in the 200 member parliament. However, due to an informal tolerance agreement, the government has enjoyed the principal backing of the pro-Russian Czech Communist Party. At the same time, Prime Minister Andrej Babis from the ANO 2011 has also been able to secure majorities with the support of other parties.

There has been some public pressure on Prime Minister Babis to resign, due to repeated allegations of abusing political power in both business deals and judicial matters, and the government´s handling of the coronavirus pandemic. However, with the ongoing economic recovery and accelerated vaccine rollout, public support for ANO 2011 has increased again. The party is currently leading in the polls for the upcoming October 2021 Czech general elections.

While ANO 2011 is expected to remain the strongest party in parliament after the elections, its ability to form a coalition government that holds a majority in parliament is far from certain. The elections will likely result in another extended period to form a new government (the current administration was formed after nine months of negotiations).

Manufacturing and exports drive the rebound of Czech Republic GDP

Due to economic repercussions caused by the coronavirus pandemic, Czech Republic GDP contracted by 5.8% year-on-year in 2020. The downturn continued in Q1 of 2021, as GDP declined 0.3% quarter-on-quarter, due to rising coronavirus cases and subsequent lockdown measures.

However, since Q2 of 2021 the Czech economic rebound is gaining momentum, supported domestically by declining coronavirus cases, accelerated vaccination rollout (by early September about 54% of the population have been fully vaccinated), and the lifting of restrictions. At the same time, the country largely benefits from the economic recovery globally and in Europe. The Czech Republic economy is highly integrated into international value chains, and at almost 70%, the export-to-GDP ratio is one of the highest in the EU.

Czech Republic GDP is forecast to rebound by 3.6% this year. Consumer confidence has picked up again since April, and in August it reached its highest level since December 2019. In June, the manufacturing purchasing manager index climbed to an all-time high of 62.7, fuelled by new orders, in particular from abroad. While capacity constraints and raw material shortages somewhat restrain the recovery, industrial production is forecast to increase by almost 11% this year, after a 7% decline in 2020. Czech Republic exports of goods and services are expected to increase by about 10.5% in 2021. Goods exports have surpassed pre-pandemic levels, while service exports are still low due to subdued tourism inflow.

Since April 2021 inflation has increased, expected to average 2.7% this year. The surge is mainly due to higher fuel prices and higher excise taxes introduced in 2020. While these effects are likely transitory, the economic recovery will keep core inflation elevated in the coming months. Increased new orders and material shortages in the manufacturing sector will feed into higher consumer prices.

As inflation has increased above its upper target rate of 2%, the Central Bank has decided to focus on inflation targeting instead of further supporting the business cycle (in 2020 it had cut rates by 200 basis points). Since June 2021 the Czech National Bank has hiked its benchmark interest rate twice, from 0.25% to 0.75%. This monetary policy shift is helped by the fact that the pace of economic rebound has exceeded expectations.

In order to cushion the economic repercussions of the pandemic the Czech government launched a large stimulus package in 2020, including wage subsidies for employers, a lowering of the VAT rate, tax waivers and tax deferrals, and loan guarantees. Together with lower tax revenues, this led to a fiscal deficit of 6.5% of GDP in 2020. In 2021, the deficit is expected to widen to about 8%, as several pandemic support programmes and major tax cuts have been extended. In 2022, the deficit is set to narrow to about 4% of GDP as pandemic spending will ease, and fiscal tightening should begin in 2023.

Public debt is expected to increase to about 43% of GDP in 2021, up from the low annual levels of about 30% of GDP recorded before the pandemic. However, Czech public debt is still relatively low compared to other EU countries, remaining well below 50% of GDP. It also remains manageable in terms of government revenues. Almost 50% of public debt is held by non-residents, while less than 10% is denominated in foreign currency. Public debt is expected to remain rather resilient against interest rate and exchange rate shocks.

The Czech banking sector has gained a relatively strong position over the past couple of years, which has helped to sustain its resilience during the pandemic. The risk of asset-quality deteriorations has decreased, due to the ongoing economic recovery and additional government fiscal stimulus.

Tier 1 capital ratio is high at 21.4%, and more than a quarter of banks’ assets are liquid. However, profitability remains subdued due to the still low interest rates. While non-performing loans have increased since Q4 of 2020 after the expiry of a loan moratorium, with 3% of total loans they remain low.

Performance upgrades for some main industries

Due to the ongoing economic rebound, the business performance/credit risk situation of machines, metals, services, steel, and textiles has been recently upgraded from “Poor” to “Fair” (see chart above). The machinery sector is forecast to grow by more than 6% this year, due to the recovery of domestic industrial production and higher demand from abroad. For steel and metal businesses orders and sales have rebounded, and producers currently benefit from higher sales prices due to increased demand and shortages of steel and metals products. Czech metals output is expected to increase by 10% in 2021, after an 8% contraction last year. The service sector benefits from the lifting of lockdown measures, and is set to grow 1% in 2021 and 3.5% in 2022.

However, the performance of some main sector remains subdued. In the construction sector, businesses have been affected by postponement of projects and reduced order volumes during the recession. Czech construction output is forecast to rebound by only 1% this year, after a 3.5% contraction in 2020.

While Czech automotive industry output is expected to increase by 11% in 2021 after a 12% decline last year, sector performance is currently hampered by semiconductor shortages and higher input prices. Margins of suppliers were already under pressure before the coronavirus outbreak, due to disappointing sales in 2019 and increased investment intended to cope with the shift away from combustion engines towards e-mobility.

While the number of Czech business insolvencies is still low compared to the pre-pandemic period, an increase in the coming months cannot be ruled out. Mainly exposed are businesses that struggle with increasing costs for material/commodities, labour and energy.

The recovery is gaining further momentum in 2022

Czech Republic GDP growth is forecast to accelerate to about 4.5% in 2022, contingent on a containment of the pandemic and further vaccine rollout. Economic activity is expected to reach its pre-pandemic levels early next year, with domestic demand mainly contributing to growth. Private consumption is forecast to increase by more than 6% next year, driven by pent-up demand and further decreasing unemployment. Real fixed investment is estimated to grow by more than 8%, while exports and industrial production will expand by about 3% each. Inflation will decelerate to 2.1% in 2022, as supply side challenges ease and the koruna appreciates in line with the economic recovery.

Prior to the pandemic, trade credit was used in more than 80% of B2B sales in the Czech Republic. After the virus brought most of the world to a standstill, this plummeted to about 50%.

As vaccination campaigns are underway, the world economy is recovering from the pandemic. Advanced markets generally have higher vaccination rates than emerging markets

Russia's Fortress strategy is not for free

Russia's strategy to protect its economy against external shocks is successful, but comes at a cost for its population