The highest percentage of the suppliers interviewed in Hong Kong (42%) reported that domestic B2B customers pay invoices late due to liquidity issues. 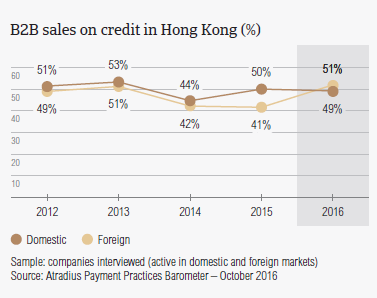 Hong Kong’s economy is forecast to grow 2% by the end of this year. The modest growth reflects, among others, China’s slowdown and the country’s vulnerability to the difficult external environment at global level.

As trade-related activities in Hong Kong appear to slow down, suppliers surveyed in the country are confronted with a challenging business environment which prompts them to protect their businesses against the risk of payment default by B2B customers trading on credit. 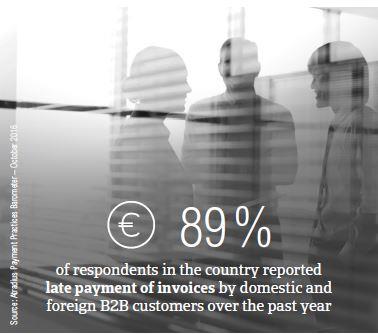 In contrast to the regional pattern, which  points to Asia Pacific suppliers’ stronger preference for trading on credit in their home market than abroad, suppliers in Hong Kong appear to be slightly more inclined to offer credit terms overseas than domestically. 48.8% of domestic, and 51.4% of foreign B2B sales were made on credit (averages for Asia Pacific: 50.3% domestic and 42% foreign). This is likely to reflect the open and strongly trade-oriented nature of Hong Kong’s economy, which now appears to be experiencing a notable deceleration in growth (from 2.4% in 2015  to a maximum of 2% this year) chiefly due to the adverse impact of China’s slowdown.

89% of respondents in the country (consistent with the response rate at regional level) reported late payment of invoices by domestic and foreign B2B customers over the past year. This resulted in an average of around half of the total value of B2B receivables remaining unpaid past the due date. This is above the average for Asia Pacific (44%). 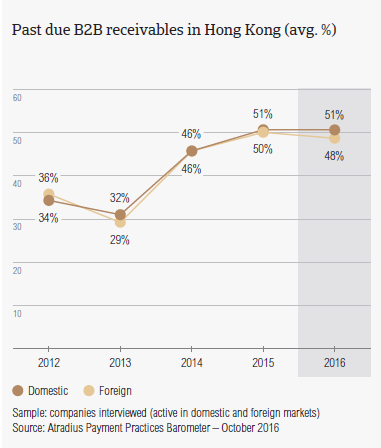 Late payment by domestic customers was reported to occur more often than from customers abroad. This is similar to what was observed in Singapore, Indonesia and India. Compared to last year, the domestic default rate in Hong Kong remained stable, and the foreign one decreased by an average of 3%. The steadiness of the domestic default rate is consistent with the challenging business environment in which the suppliers interviewed in Hong Kong currently operate. Late payment of (domestic and foreign) B2B invoices in Hong Kong is reflected in the Days Sales Outstanding (DSO) figure resulting from survey responses. This averages 35 days (survey average: 41 days), is the second lowest after that of Australia, and is two days shorter than one year ago. 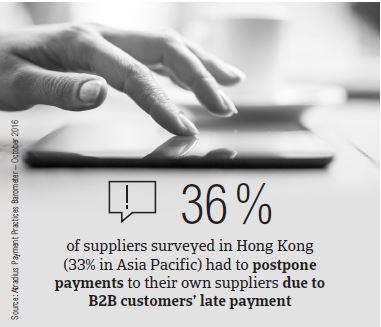 This is likely to reflect higher efficiency in collecting long outstanding invoices of high value. Almost as many respondents in Hong Kong (37%) as in Asia Pacific (40%) expect an increase in DSO over the next 12 months. 47% of the respondents in the country (45% in Asia Pacific) do not anticipate changes in the DSO figure over the same time frame. 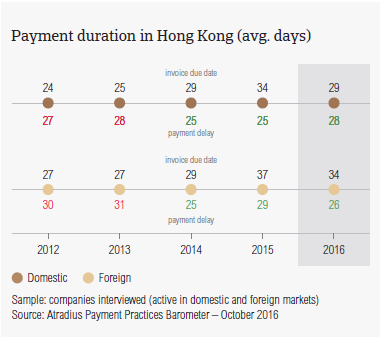 Payment terms extended to domestic B2B customers by respondents in Hong Kong average 29 days from the invoice date (average for Asia Pacific: 32 days). Foreign customers are requested to settle invoices a little later than domestic customers (on average, five days later). These more relaxed payment timings may be seen as a way for suppliers in Hong Kong to strategically expand sales with overseas markets, now that sluggish global demand weighs on trading activities in Asia. Over the past year, the average domestic payment terms in Hong Kong have been shortened by an average of five days. This may be a mechanism used by suppliers in the country to cope with the challenging business environment. Payment terms offered to foreign customers, in contrast, are longer than last year (by an average of three days).

Past due invoices are paid, on average, two months from invoicing

Despite longer payment terms extended in foreign B2B trade, both foreign and domestic customers of suppliers in Hong Kong settle past due payments almost at the same time,  within an average of 27 days after the invoice due date (no change compared to last year). This means that suppliers interviewed in Hong Kong turn past due invoices into cash, on average, nearly two months from invoicing (in line with the average for Asia Pacific). 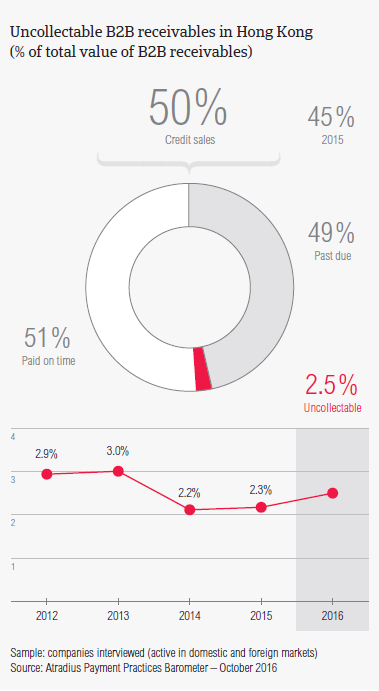 The proportion of B2B receivables reported by suppliers surveyed in Hong Kong as being written off as uncollectable (just over 2.5% of the total value of B2B receivables, 2.3% last year) is almost in line with the average for Asia Pacific (2.1%). Domestic uncollectable receivables were written off more often than foreign ones. This tallies with the concerns about the collection of outstanding invoices in the home market expressed by suppliers surveyed in Hong Kong and commented on earlier in this report. Uncollectable domestic B2B receivables originated most often from the consumer durables and electronics industries.

In line with the regional response rate, half of the suppliers surveyed in Hong Kong wrote off receivables  as uncollectable because the customer went bankrupt or out of business. Around 30% of suppliers surveyed wrote off receivables as uncollectable due to a number of reasons, such as the failure of the collection attempts, inability to locate the customers or the age of the debt (too old to be collected).

For more insights into the B2B receivables collections practices in Hong Kong and worldwide, please see the Global Collections Review by Atradius Collections (free download after registration), available from October 2016 on atradiuscollections.com 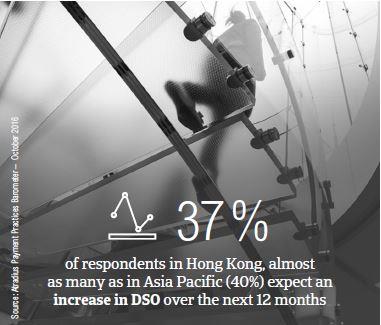 Suppliers surveyed in Hong Kong reported trading on credit terms mainly with B2B customers in the consumer durables, construction, ICT, logistics, food and services industries. Invoice payment terms extended to B2B customers in both the construction and logistics industries are notably more relaxed (averaging 40 days from the invoice date) than those offered in the other industries with which suppliers surveyed in Hong Kong trade on credit. These latter do not differ significantly from the country and regional averages (around  30 days each).

Despite being granted more relaxed payment terms to settle their invoices, B2B customers in the construction industry take the longest to pay overdue receivables (on average 50 days from invoicing). The construction industry also generated the largest proportion of past due B2B invoices. Around 60% of the total value of B2B invoices issued by suppliers in Hong Kong ended up in late payment. This is the case for 50% and 40% of the total value of B2B invoices in the logistics and food and beverages industries respectively.

What is the future of the Hong Kong dollar peg with the US dollar? US Fed rate hikes may not be enough to change the currency regime, but increasing integration with the Chinese economy may.

China is a major economic and trading power. Trade successfully with China sets out ten simple-to-follow rules that can help make your trading relationships with China lasting and successful.

A closer look at corporate debt in EMEs

Atradius explores how rising corporate debt in EMEs affects corporate creditworthiness and identifies the most exposed countries and vulnerable sectors.